AdWords in 2017: Better for us or better for Google?

Before I go any further, I’d like to preface that this is an opinion piece. This opinion has been formed by years of collective research, industry experience, and hands-on campaign management, but is an opinion nonetheless. The opinion of this author is that in 2017, Google is dangerously close to diluting the value of one of it’s most powerful tools for small and medium sized businesses: AdWords. The key takeaway here is that Google is reducing the power of AdWords for businesses while increasing the power and revenue that AdWords provides to Google.

What makes me say this? The first indication I would like to point you towards is the new AdWords interface and some of the new tools. If you have logged into AdWords within the last few weeks, you may notice a seemingly cleaner and more user-friendly way to manage your AdWords account. I say “seemingly” because while the interface looks like it gives more data to the average Joe, it actually makes it harder to navigate to features that are the most useful in providing an advantage over the competition.

An example of this is the new bid controls. If you’re not familiar, AdWords is an auction type system by which you bid on certain searches for which you would like to show an advertisement. AdWords has added what it calls a “Bid Simulator” to help users know what amount to bid on a certain keyword to ensure that their ad is shown. That sounds helpful right? Well it certainly could be if the bid simulator did not push the user to bid an amount simply based upon where the ad will appear on the page.

As you can see in the screenshot below, Google is steering attention away from manual bids and towards using their suggested bid amounts so that you can appear “on the first page”, “above organic results”, etc. 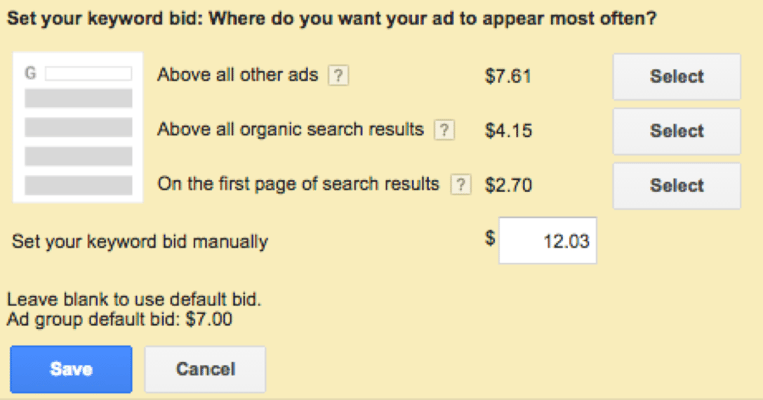 The issue here is that there is a tenuous relationship between ad position and things like conversions and ROI (which most business owners actually care about). It may make me feel good to know that my ad will be on the first page, but this does not address the actual purpose of a marketing campaign: more leads and more customers. Instead it distracts from optimizing bids based on which keywords and ad positions provide the most conversions and highest ROI.

It is quite often that an AdWords user can see a better monetary return from a campaign by choosing to be in a lower ad position where they can spend less on ads and acquire leads at a lower relative cost. However, this stands contrary to Google’s goal of acquiring more advertisers spending more money on ads and those ads generating more clicks at a higher cost. If Google truly wanted to help businesses achieve the highest ROI possible from AdWords, it would recommend bids based on conversions and leads and not arbitrary factors like ad position on a page.

Google’s suggested ad rotation strategy is another area for concern as to whose best interests are being kept at heart. Google has recently been recommending ad rotations of up to 8 different ads to be shown for the same keyword search. It claims that there are statistical advantages to testing more ads to see which one gains the highest response. However, traditional paid search philosophy teaches us to keep ad rotations at 2-3 ads so as not to muddy the waters and to have clear and actionable data.

This is saying that rather than A/B testing something, we should A/B/C/D/E/F/G/H test it. You can see how by rotating that many ads in and out for the same search it will take much longer to acquire the data necessary to determine which ad is the most successful. During this longer data collection phase, Google is receiving a lot more clicks and revenue because of the large number of ads being tested. Google may claim a higher statistical return using this approach, but it truly seems like a strategy to encourage campaigns to run longer and generate more clicks before users make decisions on the highest performing ads.

Why does any of this matter?

The biggest concern I have with all of this is the fact that Google may be “pay-to-play” now more than ever. Ads are starting to take up more and more search result real estate and that trend only looks to continue. As seen in the new AdWords interface rollout, Google also wants more AdWords users and is providing them with a less sophisticated approach based on questionable metrics unrelated to business goals.  If search results are simply awarded to the people (or companies) with the most money and resources to afford them, the value of search for the end user is seriously diminished.

It is no wonder search engines like DuckDuckGo (an Internet search engine that emphasizes protecting searchers' privacy and avoiding the filter bubble of personalized search results) have seen such traction in 2016 to now. Users are tired of their search history being sold to advertisers and having their search experience tarnished by larger agendas.

We can only hope that Google remembers what got it to where it is today: providing the best possible search results for the user devoid of any consideration towards advertising profits or outside influence.